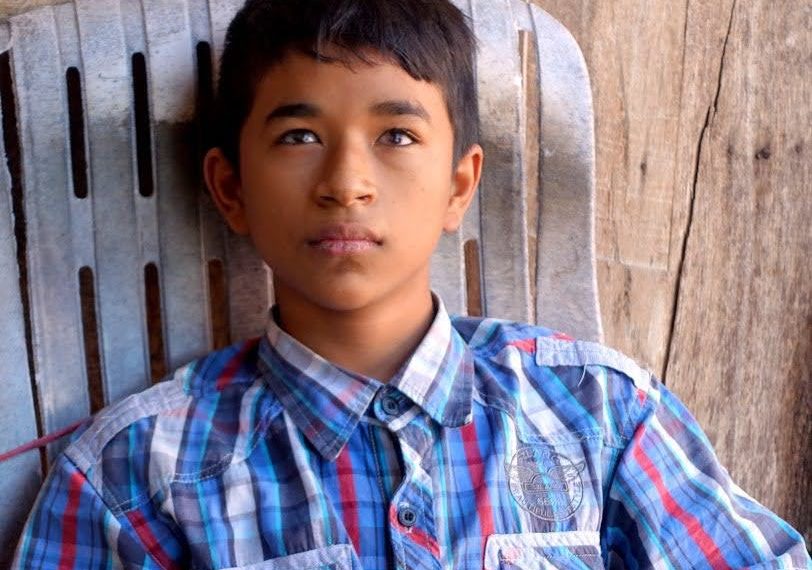 When Zu Bai was in third grade, he was playing with his friend, and the friend threw a shoe at him. It hit him in the face. His eyes started watering badly after that, for at least a week. He started to lose sight in one eye, and then the other one. That’s how he remembers it, anyway. He says he wanted to go to hospital when it happened, but his grandmother didn’t take him until after he couldn’t see, and by then it was too late, and the doctors said there was nothing they could do.

Zu Bai’s father passed away a long time ago. He lives with his grandmother, who cares for him. His mother is in Mae Sot. She’s since remarried and occasionally visits him. Zu Bai says, “My mother hasn’t looked after me for a long time already.” 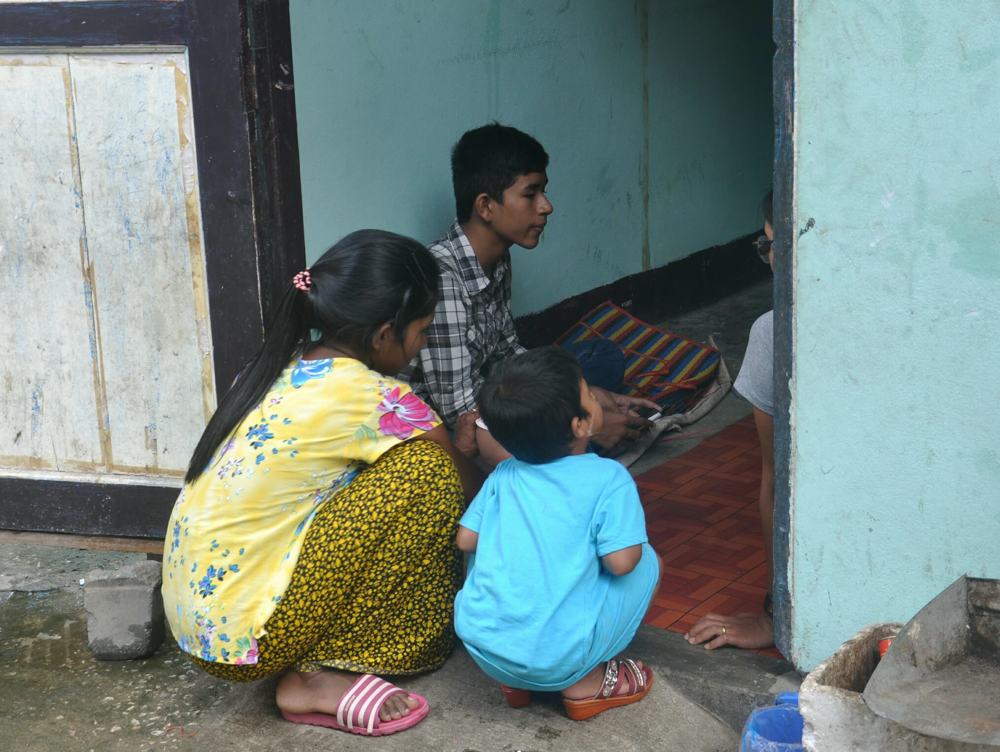 He stopped going to school after he lost his eye sight. But a teacher at his school found out what happened to him and reached out to us to ask if we could help his family. When our team met him he was 13, blind in both eyes, and his family didn’t even know that there were were education possibilities and life opportunities for people who are blind. In Mae Sot there was no one who could teach him how to read and write in braille.

He had mastered basic life skills. He can cook without seeing, shower, and wash his own clothes. He can tell what things are by touching them. 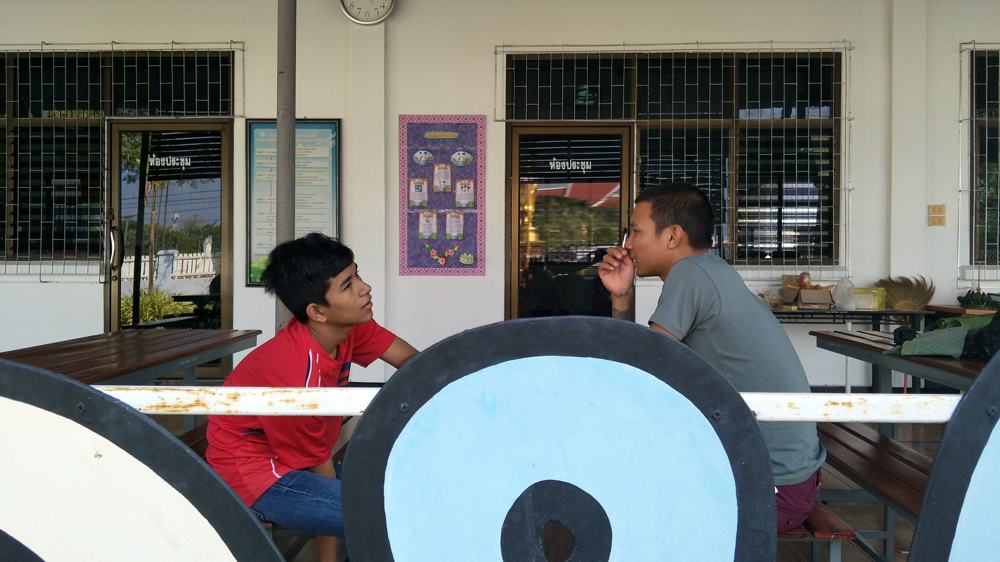 After knowing Zu Bai for some time, our staff member Friend realized that this boy should be in school. He used to be able to read and write in Thai, he was bright, he loved music, and he loved to learn. Zu Bai really wanted to be able to go to school again and was excited by the idea. But when she first talked about it with him and his grandmother, his grandmother wasn’t ready for him to leave her yet to go to school. Especially since finding a school that would take him would involve him going to a different city. She had just had a stroke, and he was a help and comfort to her. All of the options for blind students were far away. She told him, “If you go, I will kill myself.”

But in October of 2019 Zu Bai’s grandmother passed away. His uncle in Bangkok became responsible for him. Zu Bai didn’t have proper documentation and was unable to leave Mae Sot to travel to other parts of Thailand. Going to stay with his uncle wasn’t an option. Instead his uncle’s wife traveled to Mae Sot to stay with him and care for him. He could have returned to Myanmar, but his uncle didn’t want to send him there. He didn’t believe that relatives there would care for him well. Zu Bai’s uncle also wanted for him to have a chance to go to school and continue his education, but he had no idea where he could go, or how to get him there. 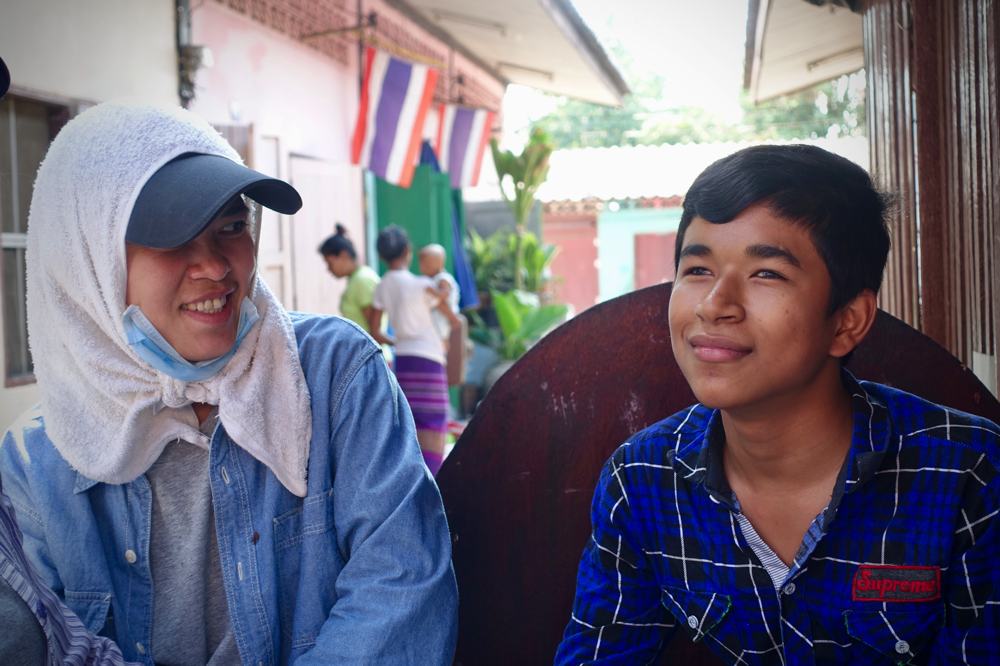 Friend decided to make it her personal mission to find a way for this boy to continue his education and get the help he needed to have a brighter future. She just needed to find a school that would take him.

This would prove to be a difficult and challenging task that would take time and commitment and over a year to accomplish.

The first problem was that Zu Bai hadn’t actually completed third grade. The way the school system works, if you don’t write the test to complete third grade, and you transfer schools, you are bumped back to first grade. This would be a hard situation for a boy who was now 15 years old. There aren’t many accommodations for a child who is behind a grade level to come back into the system later. 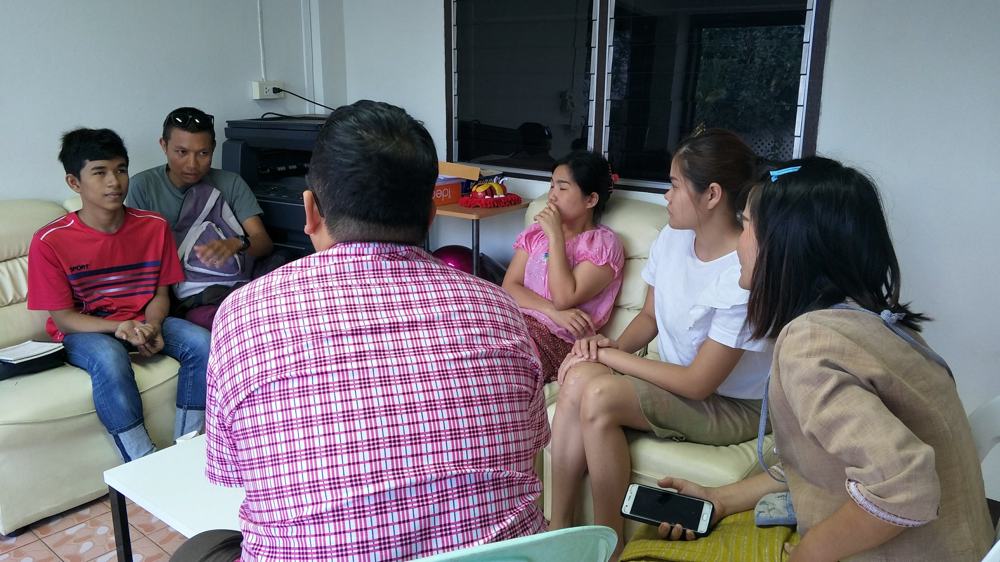 Friend talked to a blind school in Chiang Mai about accepting him as a student. But they were hesitant to take him. “It would be hard for him to go back into third grade when he’s so much older than the other kids. ” But they did say they would review his documents

In November of 2019, Friend met with the school in Mae Sot, trying to transfer school records to the Chiang Mai school. But, ultimately they could not take him because his lack of documentation. At first it was believed that he had a hospital issued birth certificate, but his parents never took it into get a proper government certificate and official birth registration. The school might have been able to make a special request for him to transfer there, but first they had to see the form from the hospital. But Zu Bai and his aunt didn’t have that form. It was at his grandfather’s house. When the document was finally located, it turned out to be an informal birth record issued by a local NGO more than 4 years after Zu Bai was born. It was not an official document and could not be used. We still don’t know for sure what year Zu Bai was actually born in.

Next, Friend contacted a special education center in Tak. They said to contact the special education center in Mae Sot. The principle of the Mae Sot center called a school in Petchaburi, which is in the south of Thailand. The school principle was not only willing, but excited to take him in.  He was very enthusiastic to help. He even traveled all the way to Mae Sot to meet Zu Bai and tell him about their school.

Again, the problem was documents. Without them, Zu Bai could not travel to this school. But then COVID19 happened and made it very difficult to follow up right away. 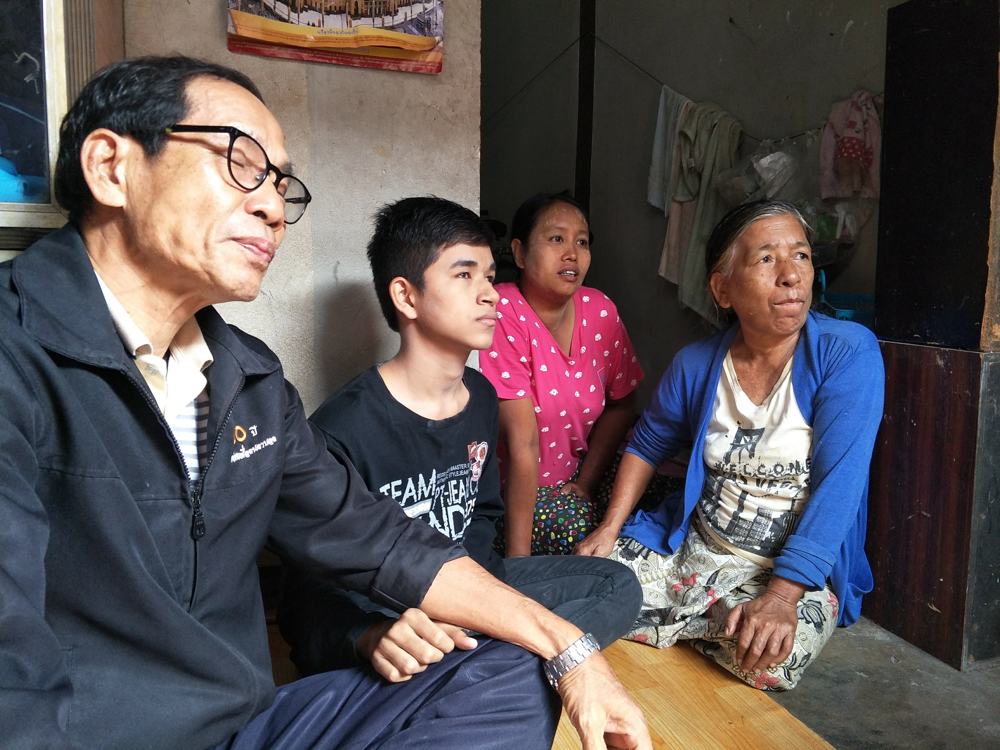 Friend contacted organization after organization as she was able, trying to work out the details to help Zu Bai get travel documents. She got help from Best, a local human rights lawyer here in Mae Sot. Best directed Friend to a handbook for helping stateless children access Thai education opportunities, created by Help Without Frontiers. After that Friend knew what she needed to do. She collected records from Zu Bai’s school and went to the district office. She talked to a Deputy Chief of Provincial Security and told her about Zu Bai’s case. That same day the Deputy Chief went with our team to Zu Bai’s house to meet him! 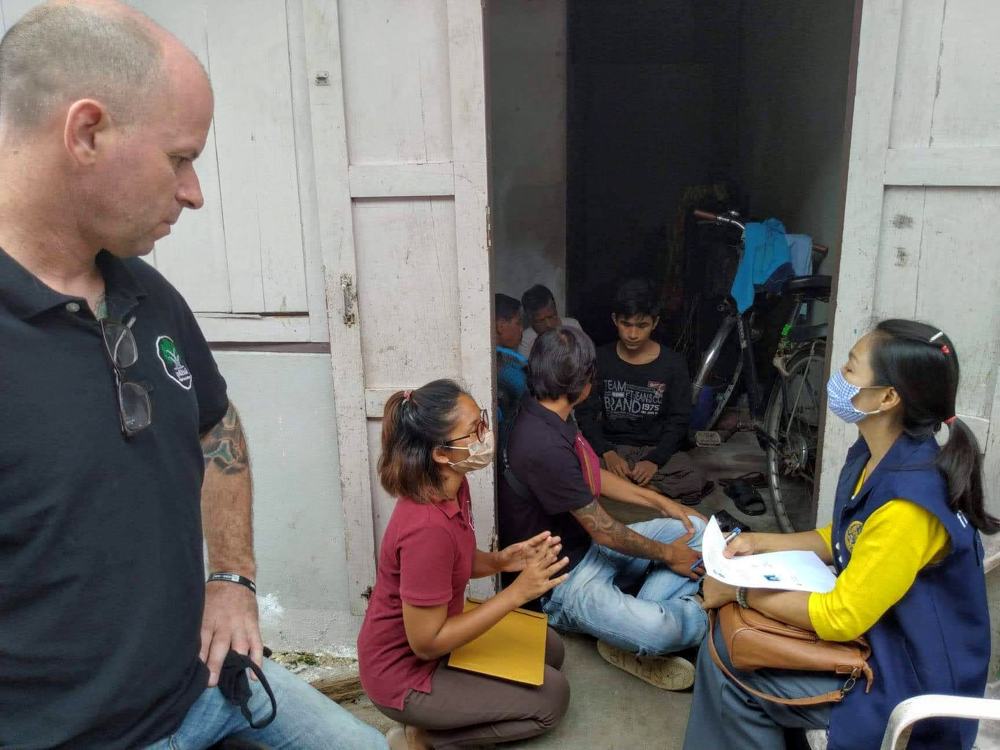 After the interview she promised to give him permission to travel. But we had to go and find the official community leader in his neighborhood and ask for his written endorsement of Zu Bai’s request. Jan and Bird went to his house to collect the letter, and then it all went to the district office to complete the paperwork. He now had permission to travel!

He had to go to the district office the day before he traveled to get the forms stamped. 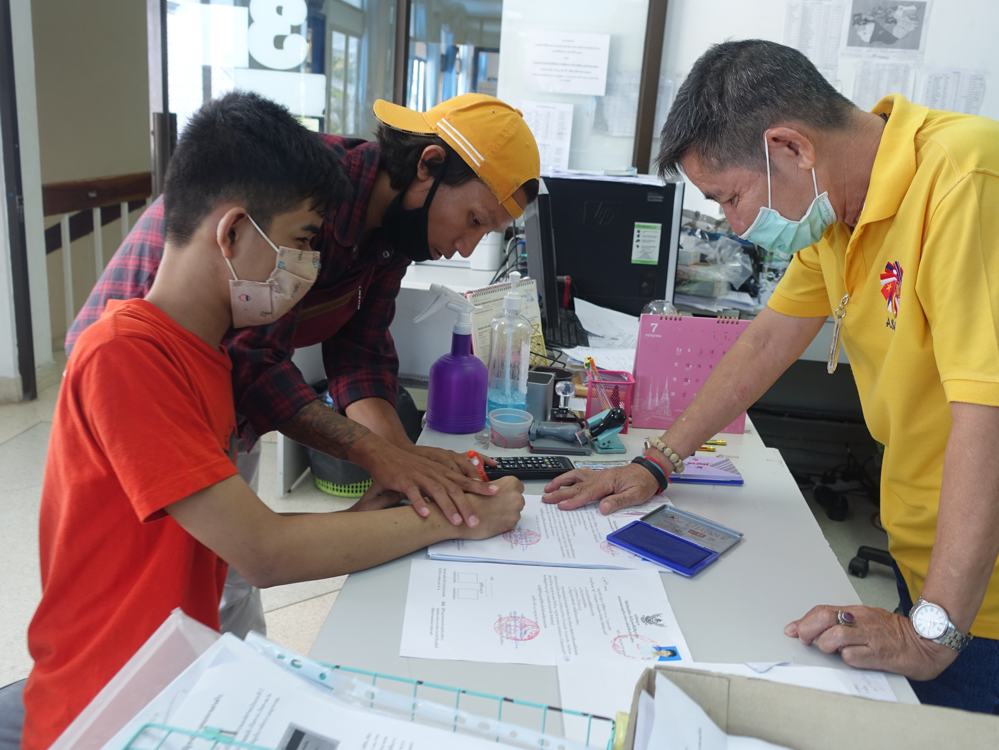 Finally, after months of effort, everything was in place and the only obstacle left was transportation. The school was supposed to come to Mae Sot and pick him up. But, because of their other commitments they kept postponing the travel date.

In the end, Friend decided we would take him there. Finally the day arrived!

Together with her husband Wayland, and Aaron, our Thai director, they took a 9 hour long road trip south to deliver Zu Bai to his new school, where he would live and be able to finish his education. On the way Friend traveled with him in the back of the truck. 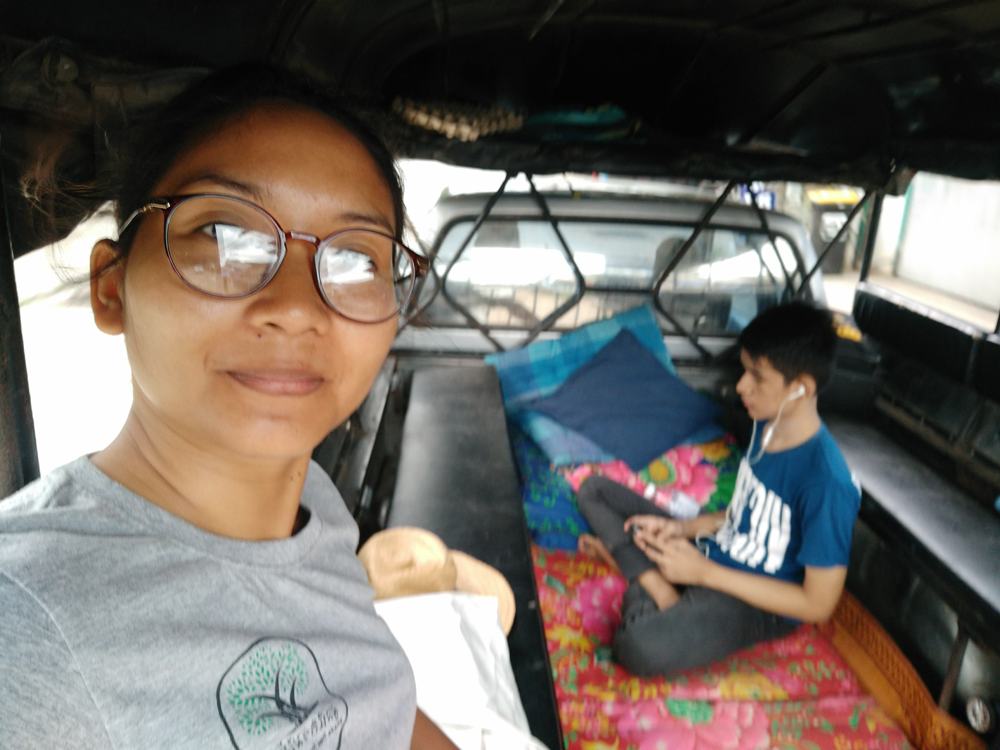 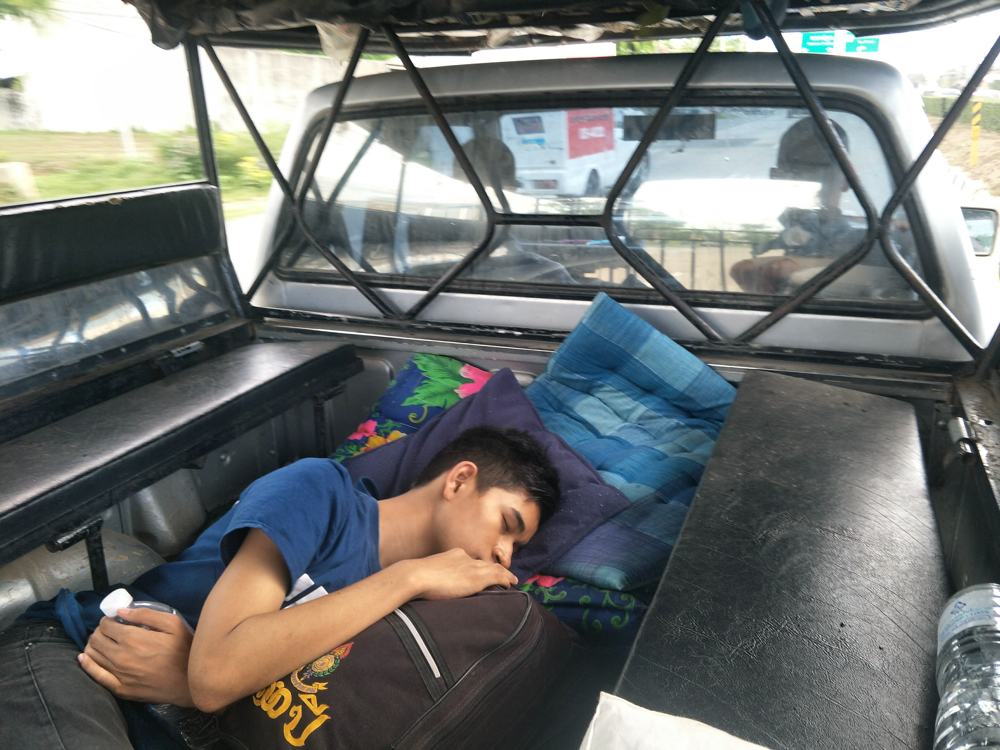 They stopped at a restaurant to eat on the way, but Zu Bai didn’t want to go inside. He wanted to stay in the truck. He was afraid that he would spill something by mistake, or make a mess when he was eating because he couldn’t see. But they helped him to come into the restaurant and encouraged him to try, helping him to feel where everything was. He was too nervous to eat much though, and they brought most of his chicken for him to finish eating in the privacy of the truck. 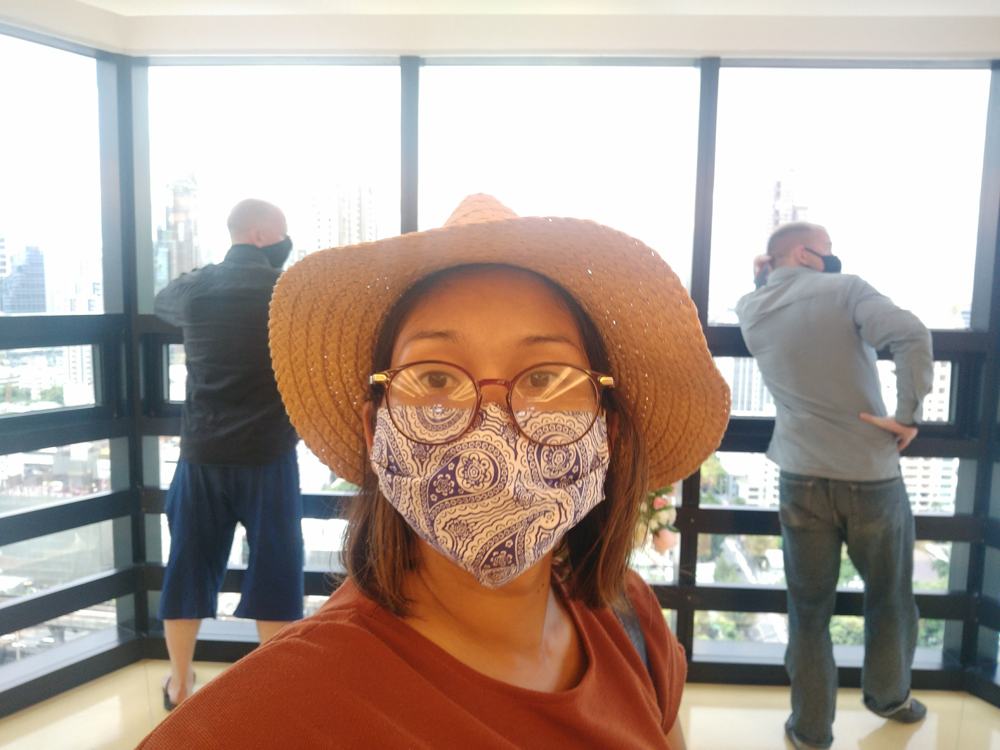 “There were a lot of things I didn’t think about before that trip,” Friend said. “Like how he would need to help to go up the stairs to the bathroom when we stopped, and need me to tell him where everything was. I didn’t realize he didn’t have a sweater until it started raining and getting cold. He had a phone that he listened to music on. He loved listening to music. He had charged it so often that the battery was swollen and the phone was damaged. I started making a list of things he needed, to share with the school director when we arrived.” 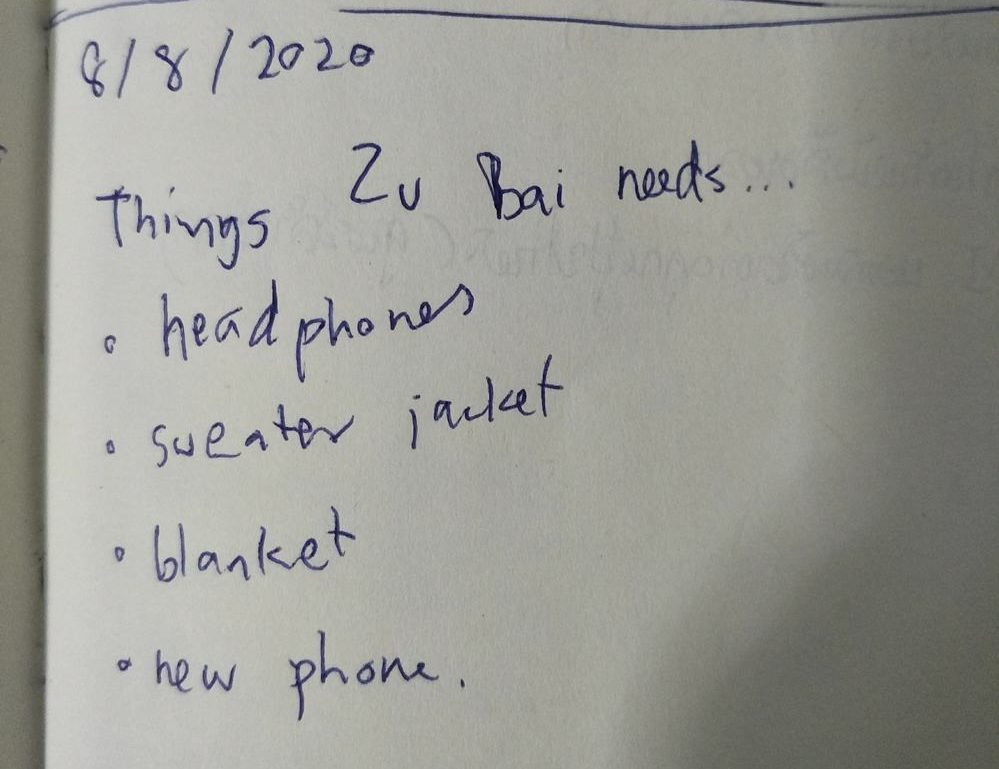 When Zu Bai arrived he was welcomed by his fellow students, almost all of whom put up their hands to volunteer to help him get settled when the teacher asked for volunteers. They assigned him one buddy, who could partly see, to help him find his way, but the teacher encouraged everyone to get to know him and help him and talk to him so he would feel at home. 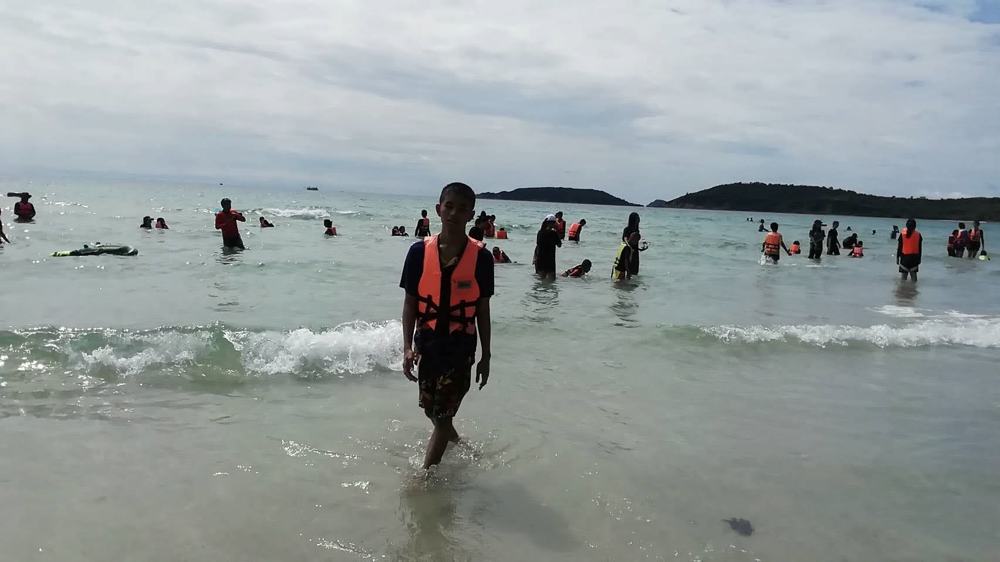 They took him to visit the ocean for the very first time. 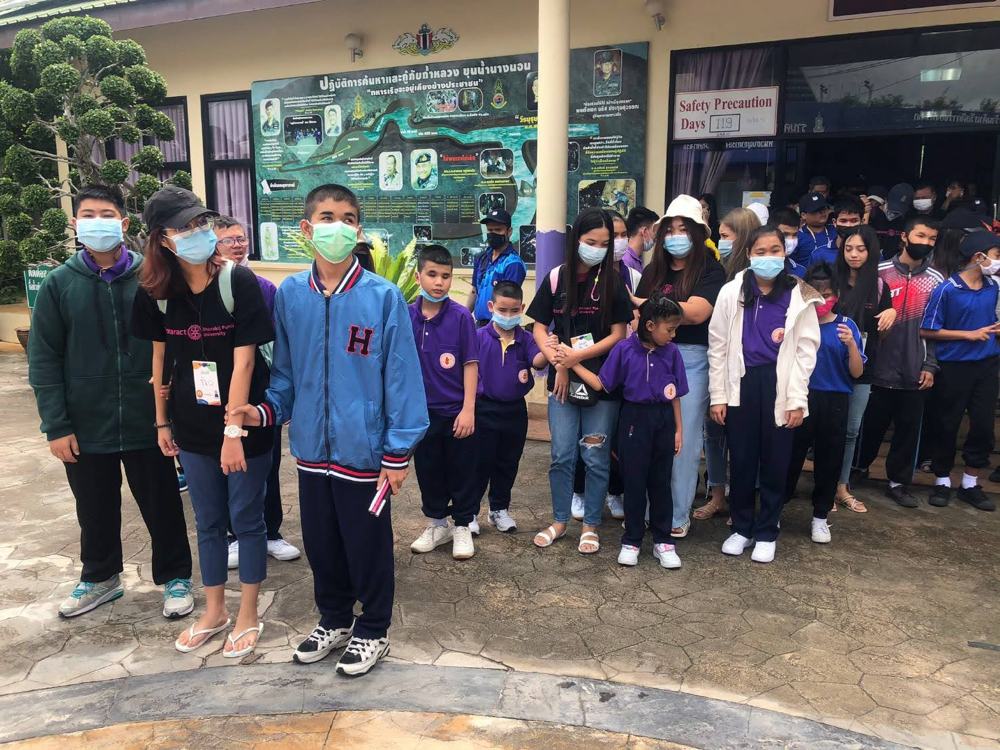 A week after he arrived the school principle sent Friend a message saying, “Zu Bai  is very happy here. He is studying diligently to learn Braille in Thai and English. He can already do it very well. This child definitely has a future.” 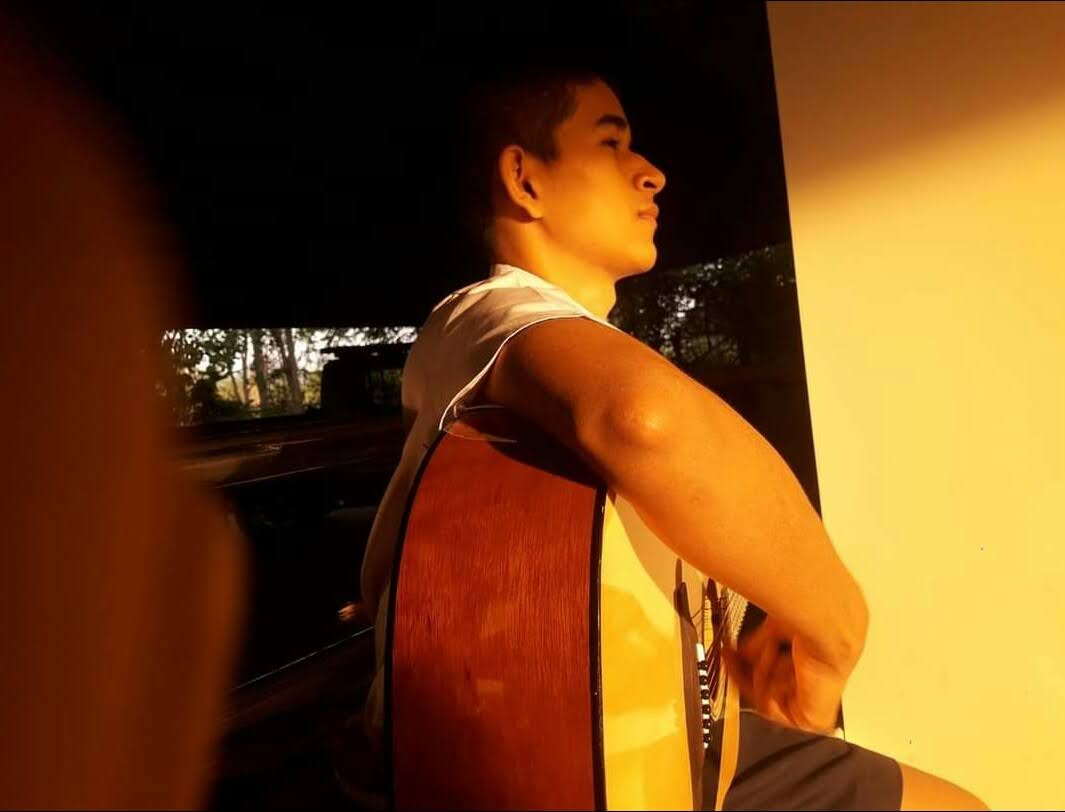 It’s thanks to his teachers at the migrant school, our rescue team, and, in the end, Friend’s persistence in the face of many bureaucratic obstacles, that a child like Zu Bai didn’t fall through the cracks and has a chance to learn and have a bright future. 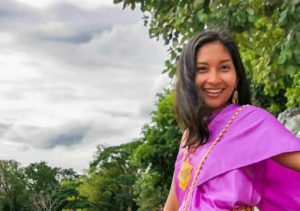 The team you support when you give to The Charis Project is filled with people who go above and beyond their job description to care for families and protect children. Thank you for the way you make what they do possible. 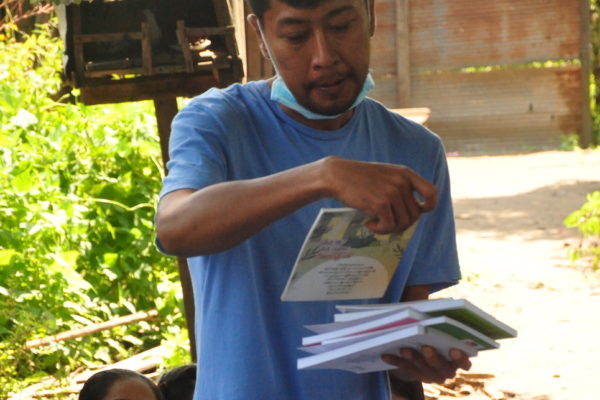 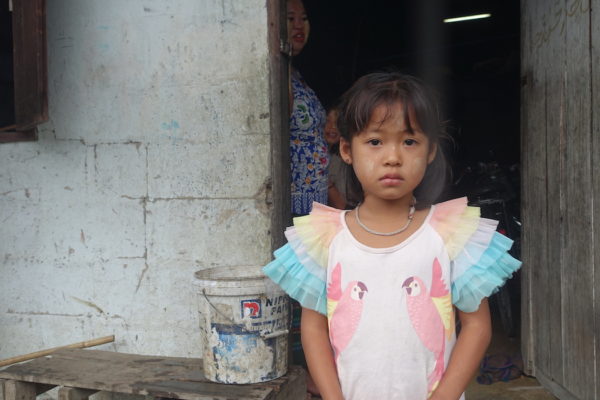 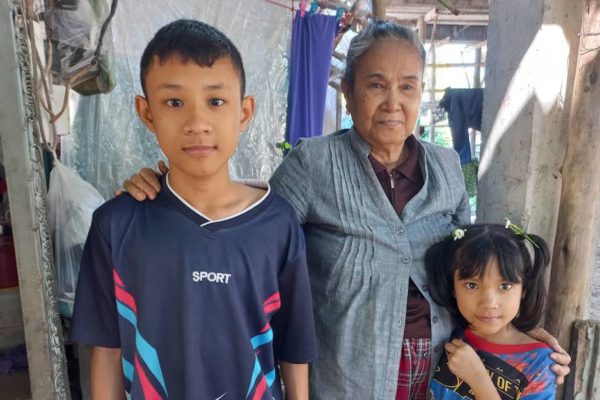